Not So Happily Ever After by Susan Barnett Braun
Released August 28th, 2018

Think history is boring? Then you’ve never met Mad King Ludwig, who inspired Walt Disney with his magnificent castle in the clouds. He ruled the German kingdom of Bavaria for twenty-two years, inspiring his people by his support for the arts. And yet, “Mad King Ludwig” rarely appeared in the capital or attended any government functions. He slept most of the day and stayed awake all night. He dined with his horse and waved pistols at servants. He created a fantasy world inside his castles, complete with caves and trap-door tables. To this day, no one is sure exactly what caused his untimely death in a lake. Who was this man: fairy tale king? Insane eccentric? Mad King Ludwig’s life followed many twists and turns on its way to Not So Happily Ever After. The book’s intended audience is young adults, but it is perfect for adults wanting to learn more about Ludwig also.

I read this book in one sitting last night. Written in a language that would entertain a middle schooler, the book nevertheless didn’t fall short when it came to pulling in my interest. I feel like I personally got to know King Ludwig II of Bavaria last night; a man who, before that, I had scarcely even heard of.

His love of fairy tales and folklore, his intricate and unique castles, his personality and manner of assigning story-like names to real life proved to be captivating. It is no wonder that Ludwig’s people often called him the Fairy Tale King – he earned the name for certain.

The book’s title does not lie. King Ludwig meets his end in less then pleasant circumstances and I confess that I didn’t want the book to end in the way that I knew it headed. I am not, however, sorry that I read about the Bavarian ruler. I found myself fascinated by and even relating to parts of Ludwig’s life, and I learned a good bit of history in the process. The photograph’s included of Ludwig and those close to him, added greatly to the story.

I’d love to visit Ludwig’s castles and, quite frankly, would love to live in one of them. A real life castle built as, possibly, as close to a fairy tale castle as possible? It would be a dream come true!

I would certainly recommend this book and hope to get a hard copy sometime. 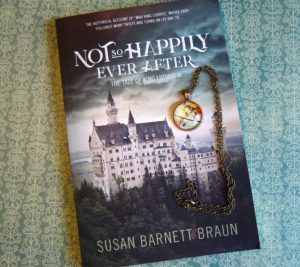 To celebrate her tour, Susan is giving away a grand prize of a world/globe necklace and a paperback copy of the book!!

Be sure to comment on the blog stops for nine extra entries into the giveaway! Click the link below to enter. https://promosimple.com/ps/d8a1/not-so-happily-ever-after-celebration-tour-giveaway

Random Thoughts From a Bookworm, January 9

Susan Barnett Braun earned a BS in retail management from Indiana University and an MA in education from the University of Alabama. She taught for eight years in northeast Indiana, earning a Lilly Endowment Teacher Creativity Fellowship and a National Endowment for the Humanities Summer Study Scholarship. Susan has had work published in Parents, Children’s Ministry, and The Secret Place. She also writes online for Fort Wayne Visitor’s Bureau and blogs at Girls in White Dresses. She is married with three wonderful young adult daughters. Susan enjoys reading, playing piano and organ, and spending her time with her family and pets (currently three rabbits and a chinchilla).

To the KING be all glory!