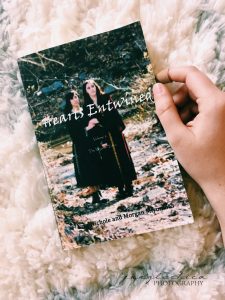 The only sound Jana could hear was her own breathing. The darkness even spooked her and she rarely feared the night. But this fear was almost crushing. Pain on top of the fear wrapped the Royal’s mind into a frantic state. She curled to her side, wrapping her arms around her knees that pressed tightly against her chest. If only she didn’t feel so alone and terrified. Why did the High King feel so distant? The Scripture she rehearsed in her heart felt cold and she wondered, if her heart too, would soon turn to a stony statue like that of her former trainer’s…

I am always loth to read a series. I possess a certain, perhaps unfounded and odd, fear that if I like a book, the author will inevitably ruin the story in the following books.

Hearts Entwined is Volume 3 in The Wyvern Tales. It can be read as a standalone from its predecessors, but it certainly builds on their story – and without ruining anything. My favorite characters from The Scarlet Rose are still as noble and lovable as before; and I found several new favorites.

Coen is, possibly, at the top of my favorites list. I certainly related to him the most. Rowan, Wynter, Jana, and Kicster were other new favorites and weren’t terribly far behind. Kicster, indeed, did not have nearly enough page time. He needed several more… chapters. In my opinion, anyhow.

I enjoyed the overall story. The message of friendship, loyalty, and broken trust is a difficult one, but a message that ought to be heard. The mystery behind the past of one character particularly, is well hinted at, but not at all annoying as I have found some books, though intriguing. 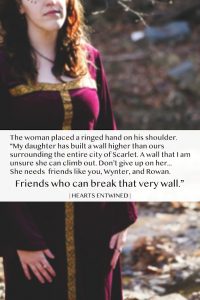 Finally, I did approach the book with some trepidation, wondering how the narrator voice might be affected by Morgan Myomoto’s co-authorship with Erin Nichole, who has previously written on her own. I had no need to worry. The story telling fared well in the hands of both authors, living up to the previous works.

Hearts Entwined is currently on sale for .99 for Kindle, so get it while you have a chance!