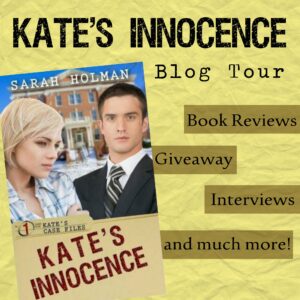 What would you do if you were accused of a crime you didn’t commit?

Kate watched as her campus was torn apart by bombs and now is being accused of perpetrating the crime. As the evidence quickly stacks up against her, she begins to lose hope that the truth will come to light. Even though the handsome FBI Agent, Patrick, has taken up her cause, will they be able to prove her innocence? Will God, who she neglected for so long, listen to her prayers for help?

Patrick is an agent with a very special team of agents. He wants to help Kate prove she is innocent, but as each new piece of evidence is revealed, that goal seems harder. He wonders why he feels so compelled to help her and so sure she is innocent despite the evidence. Will he be willing to put his job on the line to help her? Can he trust in God to make sure the truth will come out in the end?

Welcome to the blog tour for Kate’s Innocence, the first book in the Kate’s Case Files series. What is this series all about? Here are some fun facts about this new series:

~ 11 books are planned for the series

~ the next book will take place in Austin, Texas

~ some of the cases will be based on actual events

~ the series was inspired by the TV show Sue Thomas FBEye

~ Kate’s Innocence is set in November

~ each book will bring growth and change to the characters

~ in book two, you will learn the nicknames for the team members

Here is a sneak peek from the first chapter of Kate’s Innocence:

The building shook as another explosion went off somewhere. Screams, shouts, and panicked voices filled the stairway with renewed vigor. People started pressing forward, shoving to be the first out. Kate’s pace quickened. The night sky was now lit by the orange glow of fire coming from three buildings. Student wails and screams mixed with the sound of sirens to create a terrifying soundtrack to the horrible events unfolding like a blockbuster film.

Kate quickly headed toward the couple, running as best she could in the snow that was now littered with bits and pieces of debris. The young man was sitting on the snow now, leaning over his girlfriend. He reached toward her as if to pick her up.

The young man turned toward her. The sleeve of his coat was smeared with blood. She assumed he had wiped his bloody nose on the fabric.

Kate closed the distance between them and dropped to the side of the young girl. “It’s okay, I have some training. I can help her. Do you have a cell phone?”

The young man stared at her for a moment before slowly nodding. “Yeah.”

“Good, call 9-1-1 and get an ambulance,” Kate ordered and turned to the woman. She placed her fingers on the girl’s throat and felt for a pulse. She was relieved when she felt fairly steady rhythm. She then moved her finger under the girl’s nose, making sure she was breathing. She looked at the Asian slant to the girl’s eyes, and raven hair with streaks of brown. Her pale face appeared chilled by the blanket of snow beneath her. She was breathing, thank goodness. Kate touched the smooth skin next to a bleeding bump on the girl’s forehead. She took a handful of snow and pressed it on the wound. The cold and the pressure from her fingers would at least slow the bleeding.

The crunch of snow made her look up. The girl’s boyfriend stood there, running his hands through his curly, jet black hair.

“EMS is on the way. Do you think she’ll be okay?” He knelt down and looked at the Asian girl.

Kate glanced from his worried blue eyes to the still form of his girlfriend. She swallowed hard. The fact that she hadn’t moved wasn’t good, but she was breathing and her heart was beating. “I don’t know. It looks like a piece of flying debris hit her.”

He looked at her, his gaze unwavering. She wondered if he was dazed or clinging to her for hope. Kate placed her hand on his arm. “She’ll be okay.” She didn’t really know that, but she felt the need to comfort him somehow.

I’m looking forward to reading this one! Enter the giveaway to win a free signed copy of Kate’s Innocence! :)