When Charles Dickens wrote Nicholas Nickleby and Martin Chuzzlewit, he published them as serial novels in the newspaper. He did this with other stories as well, and people looked forward to the monthly installment with anticipation. Sir Arthur Conan Doyle released the famous Sherlock Holmes stories in a similar fashion in the Strand.

The idea of a serial story always fascinated me. I don’t know why, but I always wanted to try my hand at it. Possibly, because two of my favorite authors had done so. There aren’t any newspapers around to publish in, but my blog would do as well. Still, though I toyed with the idea over the years, I never brought it into reality. Until now.

Today, I am excited to announce that my new blog serial Café Chocolaté is, LORD willing, set to release its first installment on Friday, February 7th! Each installment is planned to be one chapter long. Unlike Mr. Dickens, I plan to put up a new one every week, instead of once a month. So, mark your Fridays!

It’s an ordinary Tuesday morning. The regulars are settling in with their coffees and their laptops, when an explosion rips through the air. No one can see what happened nor can they get out of the café. Stranded and perplexed, the people need answers. What caused the explosion? Where are the police? Why isn’t the man in the corner moving? And when will that woman stop screaming?

I’m really enjoying this story. I’m getting to know new characters and having so much fun with older, already established characters. Like I said in my writing update, if you’ve read Grandmother’s Letters you’ll get to see a couple of old friends in Café Chocolaté! If you haven’t, I think you’ll like them anyway. At least, I hope that you will!

In the meantime, isn’t my cover lovely? Perry Kirkpatrick makes such beautiful ones – someday, I hope I learn enough from her to do as well as she does.

Now, I really must get back to work. I’ve got another chapter to type up, another to write, and Patrick Quill is calling my name… 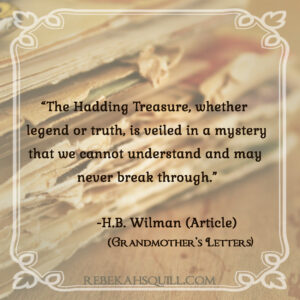 From my book, Grandmother’s Letters. The prayers and legacy of an ordinary woman act as a thread, drawing together, among others, a curious treasure hunting girl, a miserable law student, and a grumpy old man, in the most unexpected ways.

From my book, Grandmother’s Letters. The prayers and legacy of an ordinary woman act as a thread, drawing together, among others, a curious treasure hunting girl, a miserable law student, and a grumpy old man, in the most unexpected ways.

It can be difficult to see yourself. Sometimes it’s the reflection in the mirror in front of you; the bitterness staring back at you, the exhaustion showing in the rings and shadows under the eyes, the pain in the firm set jaw.

Sometimes it’s the reflection in an illustration, perhaps given by your pastor or read in a blog post; an illustration that describes you perfectly, often in a way you would rather not think about.

Perhaps even more disconcerting, for an author specifically, would be my most recent experience; a reflection of yourself in your own book characters.

I have written a few characters based after me on purpose, mostly in my older works, so it’s not surprising when they take on my traits. It would be rather surprising (and quite odd) if they didn’t. But it is startling when I begin to recognize parts of my character revealing themselves where I didn’t expect. The conviction that follows when I begin to show how these characteristics need work is usually more than I’m prepared for.

Peter tries to forget reality by burying himself in books. He reads book after book in a desperate attempt to hide from the pain of life. When I decide that reality hurts too much to think about, I start reading so that I can fill my mind with a fictitious reality and forget.

Xavier tries to handle life on his own even though he knows that he can and should turn to the LORD in times of difficulty. Instead, he stuffs down sorrow, anger, and pain, and tries to push on in his own strength. Again, I do the same. Far too often.

Claudette fights submission to authority as if it were an illness. She justifies her actions with claims of adulthood. And… me again.

No, I don’t take my fictional escapades nearly as far or as long as Peter, though I might be tempted. I’m not as vocal or rebellious as Claudette at all, but that’s not through any merit of my own. Xavier and I are pretty close in intensity when we try to stuff things down and handle them on our own. (Though, prayerfully, I am improving and taking things to the LORD more often.)

The conviction doesn’t come so much when I realize that we’re alike, even in flaws. It comes when my character has to face that flaw and deal with it – because I now have to face it as well. What kind of hypocrite would I be if I said that Claudette needs to honor her parents and I don’t? Or that Peter needs to face reality, but I can run from it? Or Xavier is too weak to control life on his own, but I am not? No, if they I have to face it, so do I.

I never imagined that writing a novel could stretch or grow me. Journeys of Four has been difficult at times; painfully difficult. There have been moments when I felt like I was being shred and taken to bits as I worked through Claudius fighting conviction and Christine struggling with her shyness. Where I haven’t shed tears, my heart has cried, prayed, and begged for help at times when I thought I couldn’t take anymore – because it became so personal.

I probably sound crazy. I might be tempted to doubt my sanity if I hadn’t lived it. Regardless, while I sometimes wished I could be the passive outsider while writing, I can now look back and thank the LORD for using the experience to draw me towards Him; to teach me about Him.

I confess to being a little afraid of what I may come across and who I might meet in 24 Days Before Christmas, but, on the other hand, I pray that I am open to see whatever lessons the book might hold. Because, if the LORD wants to use it to grow or teach me something, I certainly don’t want to miss out.

Note: I only just found this post, hidden in one of my notebooks. It was written back in June. 24 Days Before Christmas has since been drafted and typed. But that’s another post, altogether…